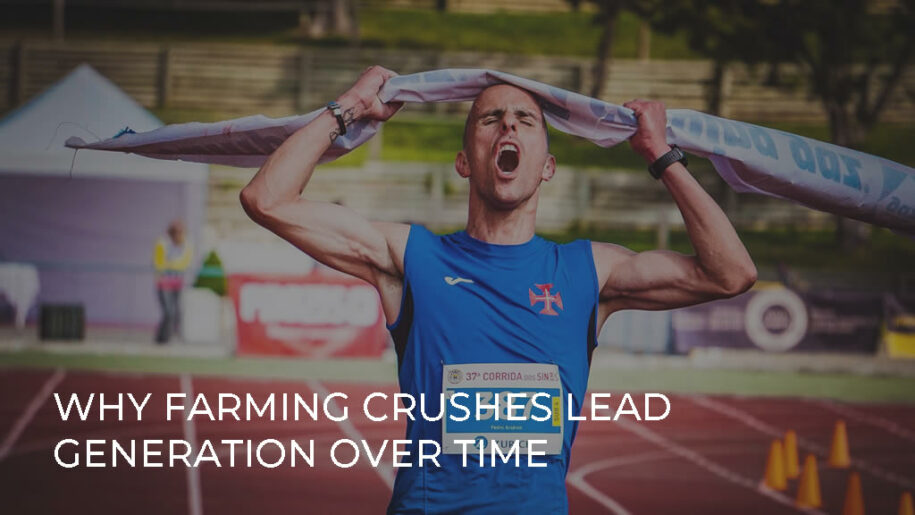 The top listing agents in the country are farmers. By farmers, I mean agents who work to establish awareness amongst homeowners in a defined geography.

In the years 2006-2012, I made fun of farming. My brokerage was using lead generation methods from Zurple, which was a company I founded along with my brother. We were crushing it in terms of return on investment. Our brokerage was minting money. Other agents near our brokerage who were farming spent appreciably more for a market share that was about the same as ours.

What I naively misunderstood was lead sources come and go. The methods that work today get more competitive tomorrow precisely because they work. They get more expensive over time. ROI drops.

With our brokerage, the tactics we used were pulling leads from Google searches, Facebook, etc. When many agents started using Google and Facebook, our ROI fell. Our experience is not unique. I read a great article recently by Meg Mullin, a Coldwell Banker agent, who experienced a massive drop in ROI with Zillow leads.

While our brokerage built on lead gen was falling, the farmers in our area became the dominant agents, with market shares in the range of 10% to 60%. The specific agent who crushed us in our local market of Coronado was Scott Aurich, a Sotheby’s agent, who is now a Celebrity Agent client. Scott is your classic farmer. The experience forced us to wake up and adapt, which is why we worked to build the best branding machine in the world and ultimately invented Celebrity Agent.

I don’t mean to discourage you from adopting lead gen tactics. I would set a portion of your marketing budget each year to try new tactics. And of course use your old lead gen tactics while they produce a positive ROI for you. But, if your goal is to become a Celebrity Agent, with a market share between 10% and 60%, never do lead gen at the expense of farming.

Over time, farming wins, every time. I’m not aware of any exceptions in the United States, and at this point I’ve worked with over 5,000 agents over two decades. If you know of an exception, call me. I would love to hear about them. You can teach me something.

I would analogize the lead gen agent to the kid who decides to be a bartender. I had a friend out of high school who did that. He worked at the Iron Gate in Belmont. In the short run, he earned what looked to be a lot of money. In the long run, every friend I had who went to college and graduate school earned appreciably more.

The critical element of farming is how it creates increasing wealth over time.

Fundamentally, the reason is simplistic.

The agent concentrating on lead gen works each year to get a slice of the 5% of homeowners who will sell that year.

The farmer, by contrast, works to build awareness and reputation amongst the 100% of homeowners who eventually will sell.

A staggering asymmetry develops over time. 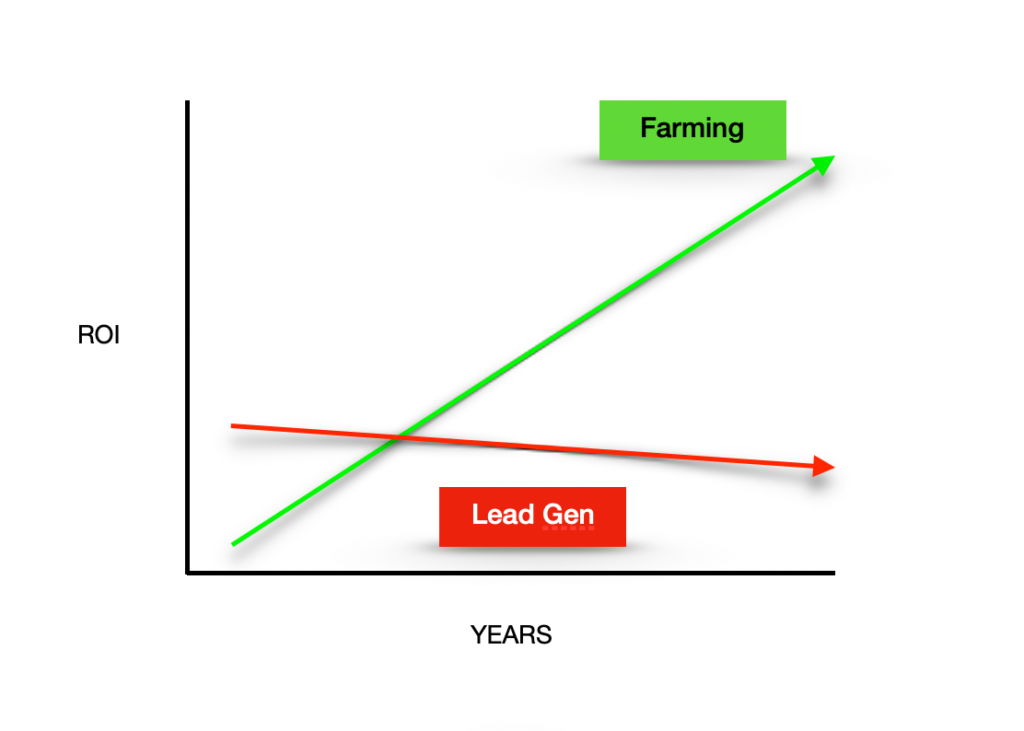 At Celebrity Agent, we do farming in a more effective manner than it has ever been done. We refer to our method as mass intimacy. It requires a sophisticated set of software and databases and is the subject of this separate post.

Comments are closed.
We use cookies on our website to give you the most relevant experience by remembering your preferences and repeat visits. By clicking “Accept”, you consent to the use of ALL the cookies.
Do not sell my personal information.
Cookie SettingsAccept
Manage consent

This website uses cookies to improve your experience while you navigate through the website. Out of these, the cookies that are categorized as necessary are stored on your browser as they are essential for the working of basic functionalities of the website. We also use third-party cookies that help us analyze and understand how you use this website. These cookies will be stored in your browser only with your consent. You also have the option to opt-out of these cookies. But opting out of some of these cookies may affect your browsing experience.
Necessary Always Enabled
Necessary cookies are absolutely essential for the website to function properly. These cookies ensure basic functionalities and security features of the website, anonymously.
Functional
Functional cookies help to perform certain functionalities like sharing the content of the website on social media platforms, collect feedbacks, and other third-party features.
Performance
Performance cookies are used to understand and analyze the key performance indexes of the website which helps in delivering a better user experience for the visitors.
Analytics
Analytical cookies are used to understand how visitors interact with the website. These cookies help provide information on metrics the number of visitors, bounce rate, traffic source, etc.
Advertisement
Advertisement cookies are used to provide visitors with relevant ads and marketing campaigns. These cookies track visitors across websites and collect information to provide customized ads.
Others
Other uncategorized cookies are those that are being analyzed and have not been classified into a category as yet.
SAVE & ACCEPT